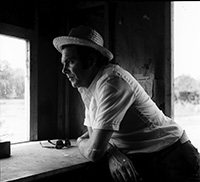 Leo Swan grew up in Lobinstown, County Meath. His parents were teachers and he became a teacher himself training at St. Patricks College, Drumcondra. Having spent a number of years teaching, in the late 1950s, he undertook a radio-operators course at Bolton Street where in future years, he would lecture on several evening courses. Following qualification in 1960, he got a job with the Flying Tigers and worked in Germany, Turkey, and the United States. During this time, he developed a keen interest in photography.

On his return to Ireland with his wife and young family, Leo resumed teaching in Raheny. It was at this time that he started a night degree in Archaeology and English in UCD. In the late 1960s, Leo became principal in Loreto Boys School in Tallaght (where he was to remain until he took early retirement in 1989).
After graduating with his BA, Leo embarked on an MA thesis that drew together his interests in archaeology, photography and flying. His thesis The Recognition and Recovery of Ecclesiastical Enclosures by Aerial Observation and Air Photography illustrated the importance of aerial photography in revealing archeological features not visible from the ground. Leo’s particular interest was churches whose outer enclosures survive as cropmarks or can be traced in street patterns, field boundaries and low earth works.
As principal in Tallaght he established a museum for the school children, while also lecturing in Archaeology in St Patrick’s Training College, DIT Bolton Street, Kevin Street and Cathal Brugha Street. He also helped establish (and later became a Governor of) Saor-Ollscoil na hÉireann.
He was a prolific author and was particularly recognized for his ground-breaking research on Tara [‘The Hill of Tara, county Meath: the Evidence of aerial photography’ (1978)] which included aerial photographs that revealed previously unrecorded features. He also wrote many papers for Ríocht na Mide on his excavations of an early ecclesiastical site at Kilpatrick, Co. Westmeath.
He was an enthusiastic supporter of archaeological societies and was a member of the Rathmichael summer school. He was actively involved in working with local community groups and organized excavations at Grange Abbey, St Doolagh’s and St John's in Coolock, several of these projects were community projects organized in partnership with AnCO (and later FÁS).
On his retirement as primary school principal in 1989 he co-founded the archaeological consultancy company Arch-Tech. Right up to the end of his life in 2001, Leo was to continue his research, lecturing, consultancy, and of course, his photography.